by Nathan Wallace
in Outdoor
0

Sony makes excellent camcorders, but how good are their action cameras? Take a look at this detailed review of several Sony action cameras.

According to historical sources, interest in first-person POV action photography began in the 1960s and 1970s, when F1 and motocross drivers began strapping bulky cameras on their helmets to get exciting footage.

But it was only in 2005 when the first GoPro action cameras were introduced. When it became evident that the demand for these types of cameras wasn’t a passing fad, Sony then entered the market.

After all, they commanded a huge share of the camcorder industry, so it only made sense that they would put their expertise to good use in this particular niche.

Sony entered the scene in 2012 with the venerable HDR-AS10 and HDR-AS15, which you can still buy from some sellers although you will have to really look for it. Today Sony offers several action cameras in its lineup.

If you’re a Sony fan, then you can pick one of these models. How should you pick? Here are some factors you should keep in mind:

How to Choose the Best Sony Action Cameras

We all know that Sony cameras can be expensive. So you may want to check your budget first so you know which cameras are affordable for you.

Here you can find out just what kind of video resolutions and frame rates are available. Standard resolution may be good enough for YouTube, but if you have a high-end TV then you will need HD resolution.

What kind of activities can you record with the camera? Here you will need to take into account the size and weight of the camera, the mounting options available, and the water resistance.

Wi-Fi and other features

Wi-Fi can offer smartphone remote control and love viewing. And since this is Sony, we may encounter other features that you may not usually find on other brands. 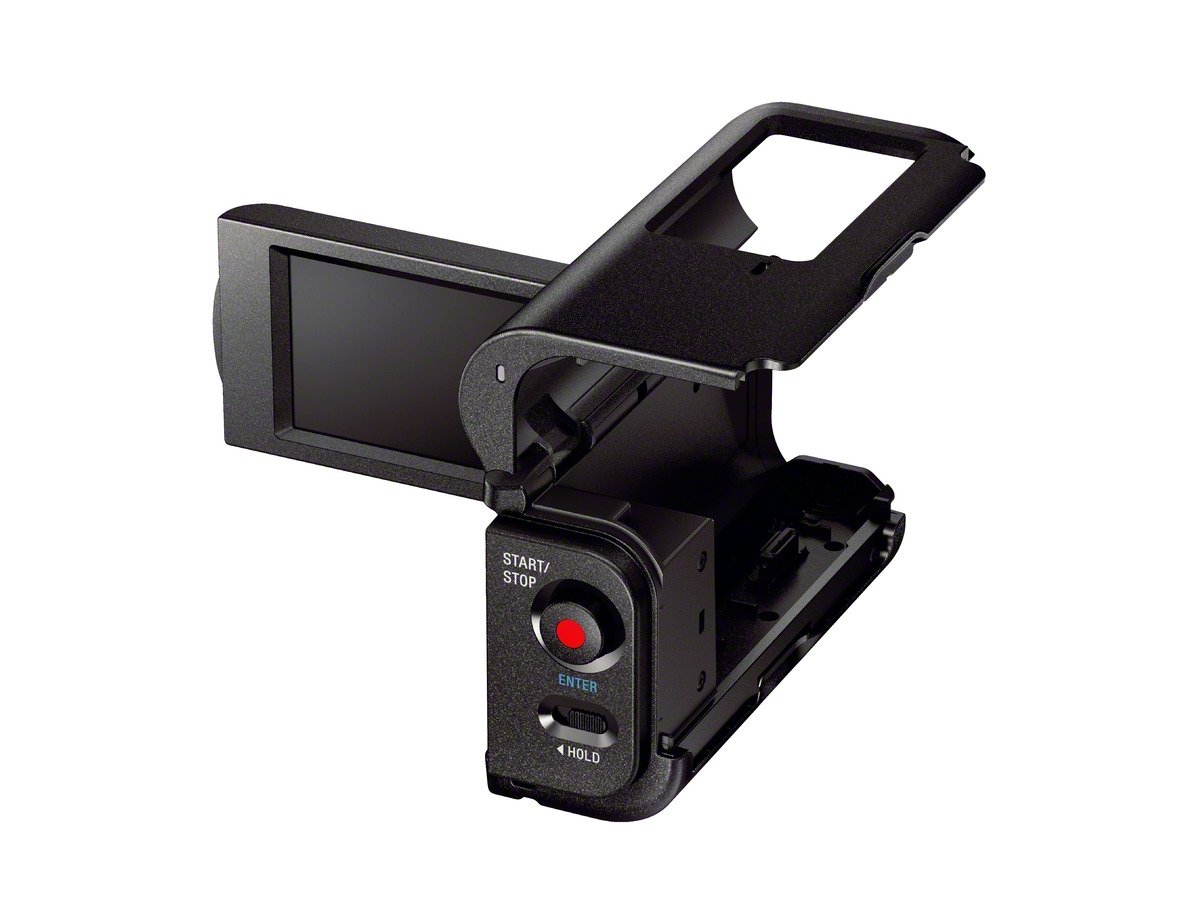 It’s not really a camera, but an accessory. It’s designed to convert your Sony action camera into a more traditional camcorder.This then makes the camera more versatile.

It comes with a 2.7-inch LCD screen. This lets you frame your shots. You can also use the screen for instant playback of your recorded footage. It offers convenient buttons (Next/Playback/Prev) so you can control your action camera more easily.

You can just use the button to toggle between your clips. Pressing the Next and Prev buttons lets you change the volume right away. It also offers a universal tripod mount so that use any tripod to hold the camera steady. It has a tripod hole at the bottom. 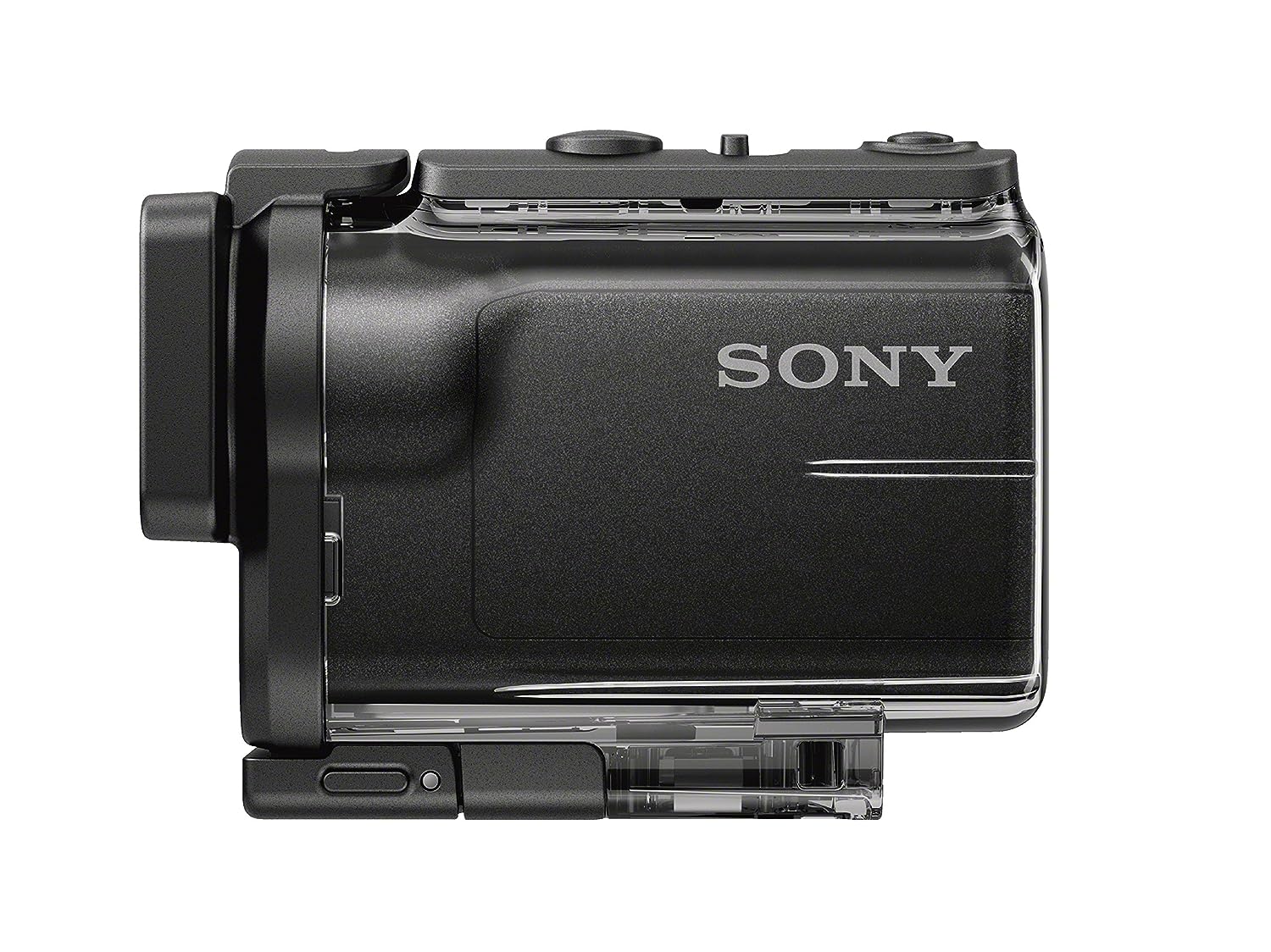 This is the cheapest Sony camera on this list, which should tell you that you’re not dealing with cheap knockoffs here. This one costs almost $200.

With that price tag, the availability of 1080p recordings at 60fps is expected. Most of the other cameras only offer 1080p at 30fps. You actually get 6 different video modes with this unit. Other modes let you shoot at 120 fps. You can also get time lapse photos with 4K resolution. You can change your angle of view (between Wide and Narrow) and you can adjust the zoom while shooting.

It also comes with image stabilization that reduces blur.This Sony is quite bulky at 5 x 4.5 x 4.9 inches. With those dimensions, you’ll hardly be able to mount this anywhere on your helmet, even if it does weigh only 15.5 ounces.

But you can just use this with your hands and take it underwater, as it can stand up to 60 meters down with the underwater housing. It also comes with a universal tripod mount. The battery offers a decent lifespan of about 150 minutes before you need to recharge it.

Since this is Sony, you can expect a very long list of special features. With its Wi-Fi capabilities, you can use a smartphone to control it. The mic comes with noise reduction, and it even records sound in stereo.

You can also connect to 5 other action cameras so you can record on all 6 cameras simultaneously. However, the Live View Remote feature is a separate purchase. 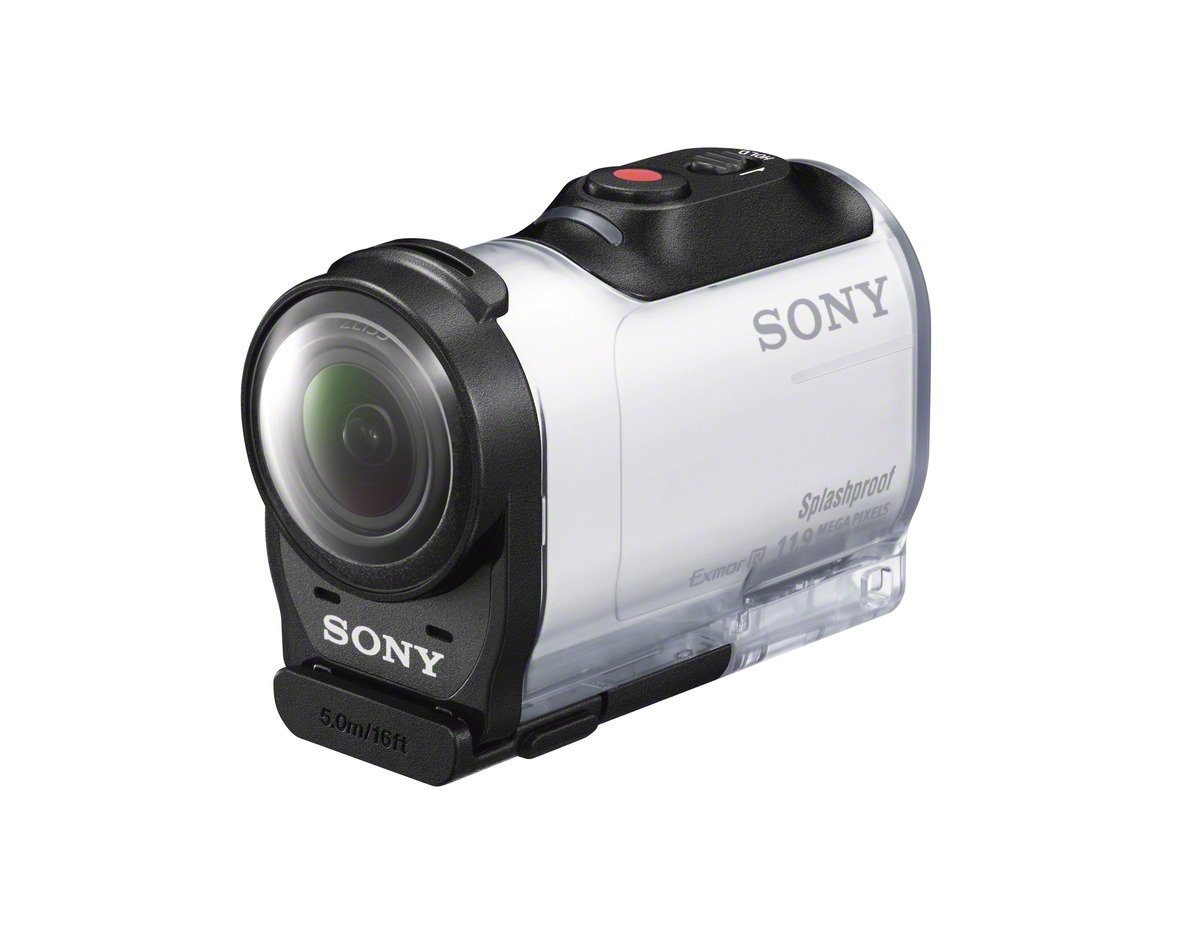 Now you have 5 video modes that includes 1080p at 60 fps plus 2 slow motion modes with higher frame rates.

Again, you have the usual stabilization features and stereo mic. And it also can get you great performance even in low light.

This is in fact the smallest splash-proof camera in the Sony lineup. It only measures 3 x 1 x 1.1 inches and it weighs just 12.8 ounces. That should be small enough to use even for a helmet.

However, you need to buy the Sony bundles to get a variety of mounting options. And you will have to buy the underwater housing too. As it is, it’s only splash-proof so you really shouldn’t submerge it under the water without the waterproof housing.

It has Wi-Fi so you can use your smartphone. You can also use the unit to control 5 other cameras, so you can get multiple POVs for one event. 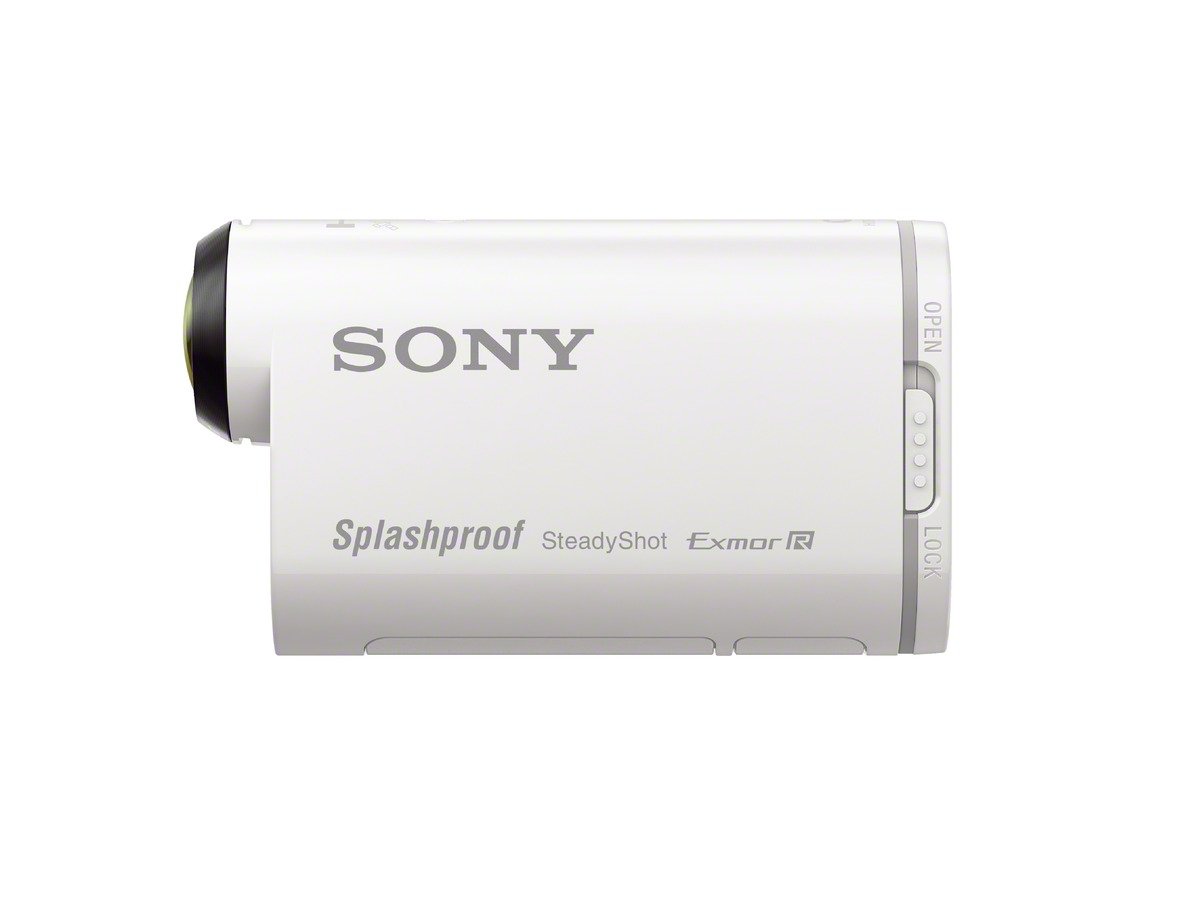 This will set you back about $300. Now you have 7 different video modes, including the special XAVC S.

That means you can shoot 4K videos at an astonishing 60 fps. You can also shoot VGA quality videos with excellent slow motion playback, since you can get a frame rate of 240 fps. Again, your videos are protected from bumps.

You have wide angle capabilities to get more of the action, and you can also zoom in so you can take clear videos from farther away.

Since this unit measures 5 x 3.2 x 6.4 inches, you really can’t use this on a helmet. But you may be able to mount it on a handle bar, on a backpack while you’re on a hike, or on a floatation device when you surf. Since it only measures 0.85 pounds, it’s possible for you to get this in the air on a drone.

You will have to buy a waterproof case separately, but it can take fantastic shots underwater. With the Wi-Fi, you can just use your smartphone as a remote controller. This comes especially handy when it’s in the air. You can also manually control the various settings such as brightness and hue, so that you’re not limited to presets.

This is helpful when you use the camera to control up to 5 other cameras to film a single event. You can have a single seamless video by adjusting the settings on the camera.

It comes with a tripod mount so you can attach it to any tripod. But you have to buy the other mounts as a separate bundle. 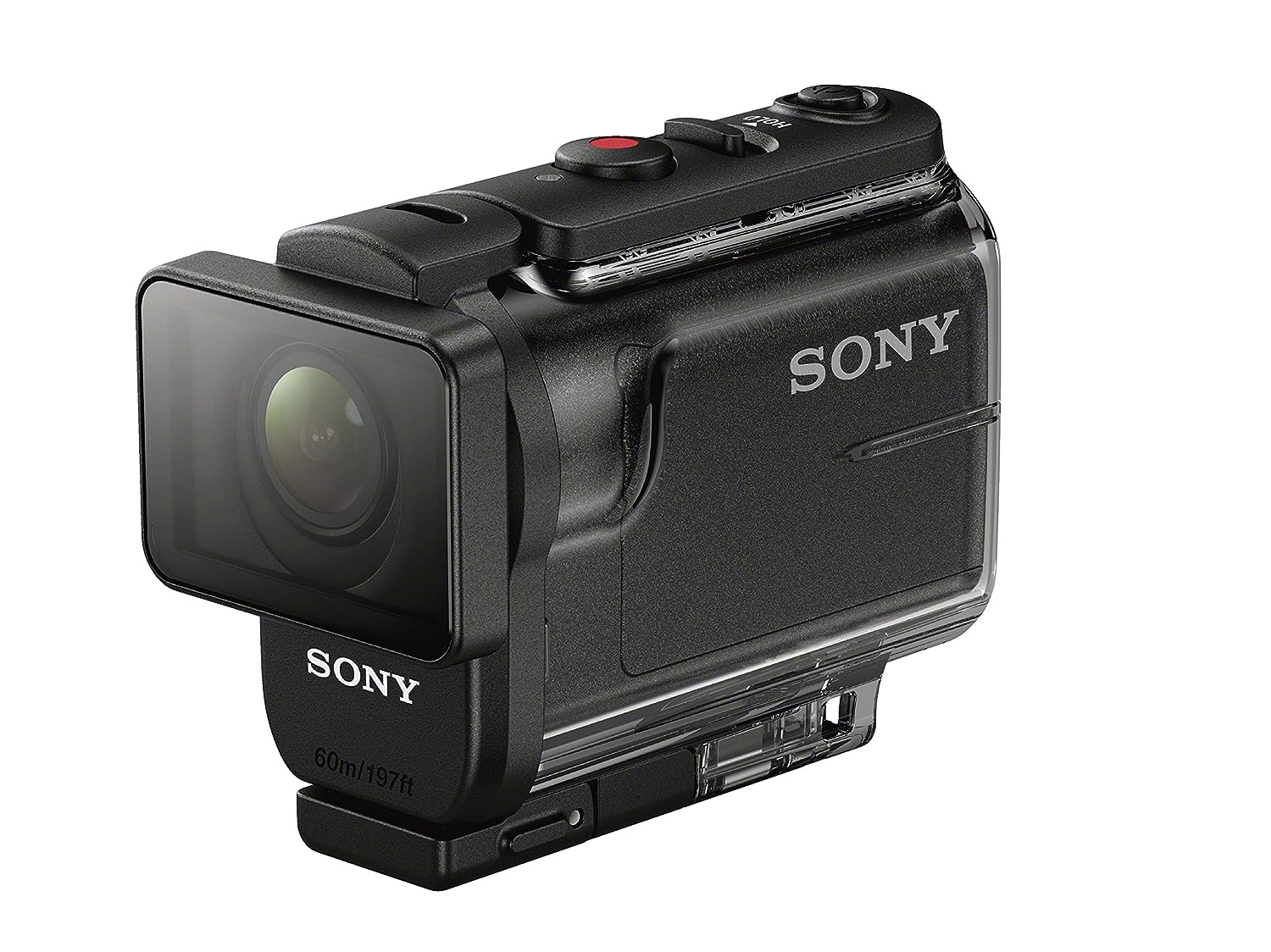 Now with the Live View Remote as part of the purchase, the price goes up accordingly.

While this may not be a worthwhile upgrade if you already own a Sony action cam, it’s still a good option if it’s your first Sony cam.

The new Stabilization feature reduces blur 3 times more effectively. And this time, you can shoot in dim light too so indoor recordings come out okay. You can adjust the viewing angle, and you can also zoom in.

This time you also get a mount adapter and cradle, so you can put it right in the middle of your handlebar. It’s quite small at 0.95 x 1.85 x 3.27 inches, and it weighs less than 3 ounces. The underwater housing lets you shoot underwater videos too, at a depth of 60 meters.

With the Live View Remote, you now have a wristwatch attachment you can use to control the camera. It also comes with Wi-Fi for smartphone remote control. You can also use to to control 5 other cameras for a single event.

Sony has also modified other features so that the camera is much easier to use. For example, there are tally lights in front, at the back, and on top so you can see the recording status from every direction.

You have to understand that Sony action cameras offer a lot more features than what we’ve mentioned here. These features are what make the cameras so big (and so expensive). But in the end, you’re assured of quality videos and images, and often that’s what matters the most!