Remote Control (RC) technology has come a long way since its inception, with faster, more powerful components increasingly being used. If you’re itching to hit the open seas but don’t have the money to fund a yacht of your own – and let’s face it, who does? Then you can still find enjoyment with an RC boat capable of hitting incredible speeds.

However, you need to know what type of boat to look for. Some designs are faster, yet have poor turning control, whereas others can pull off tight corners but must sacrifice some overall speed capability to do so. We’ll explore the distinct types of boats available, as well as how they impact on an RC boat’s speed. 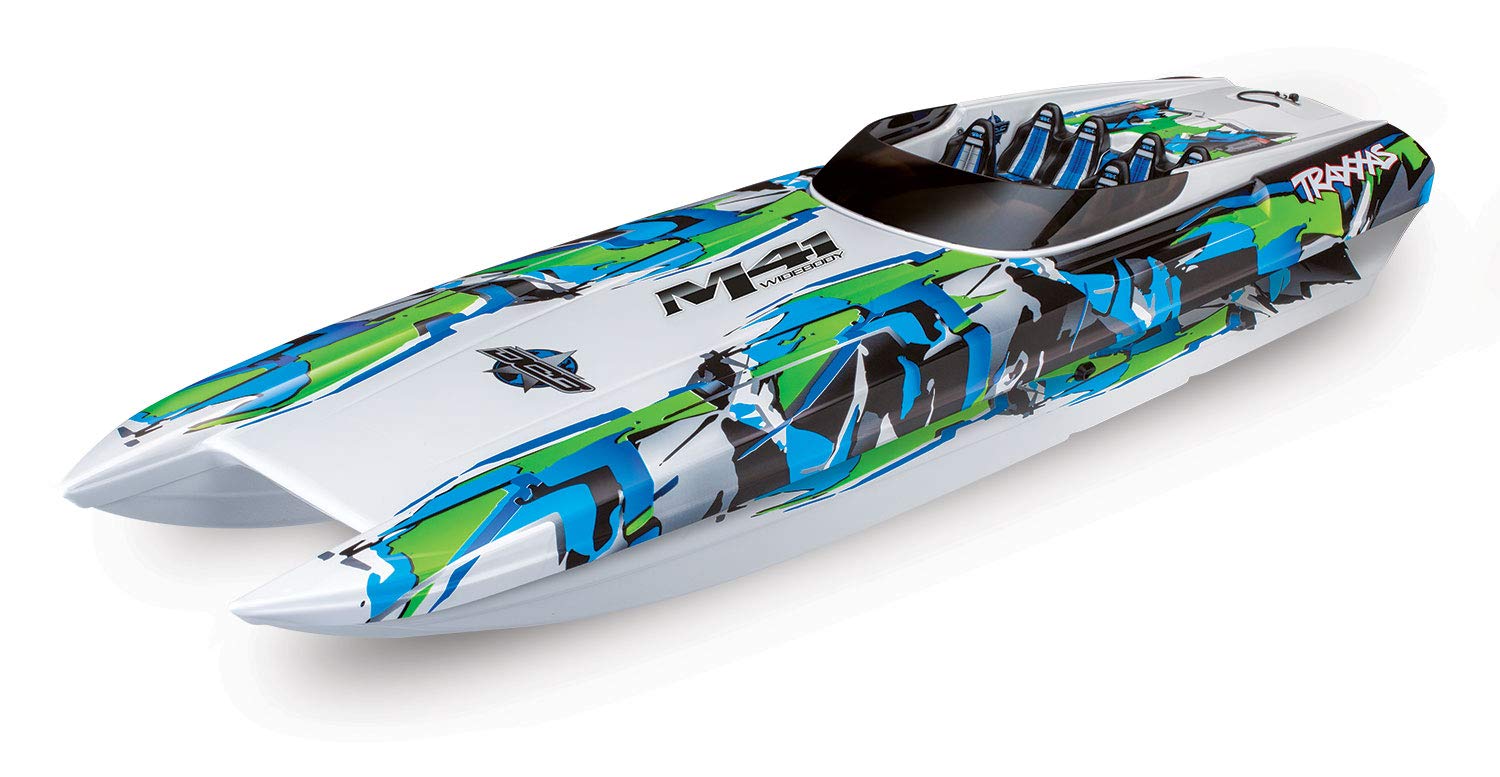 There are three main types of remote control boat, which are sailboats, racing RC boats and scale RC boats. This is before we take any further components into account, such as hull type or propulsion. Much like any RC car, helicopter or plane, these boats all operate via a remote or radio control unit that transmits signals to a built-in receiver.

As the name suggests, a sail RC boat is based on the same design as a typical yacht with a sail. These vessels are reasonably low-maintenance and easy to control, so they’re ideal for beginners. In most cases, the control unit is only used for steering, with the propulsion being wind-powered. However, some RC sailboats do have a small motor for use on still days. If you don’t want to worry about a fuel or power source, then an RC sailboat may be right for you.

Racing watercraft are your more common variants, with a vast range of choice for people just starting out in this hobby. These vehicles come powered with an electric, nitro or petrol engine, each with their own pros and cons. Electric-powered RC racing boats are the more popular choice, given that they’re cleaner and cheaper to maintain, as well as being quieter and faster.

Control systems can vary in this category. Whereas some electric racing boats are sports models designed for use in smaller bodies of water, others are designed for racing, with complex controllers. If you’re looking for the fastest RC boats around, then you should be looking at a racing RC boat.

RC scale boats are scaled-down replicas of well-known marine vessels, such as battleships or destroyers, or cruise liners. In most cases, they’re bought for showmanship or pure enjoyment, rather than racing. Unlike the sportier racing boats above, scale boats are not designed to hit top speeds. They’re more suited to the hobbyist looking for something aesthetically pleasing and realistic, not something that’s going to win a race. 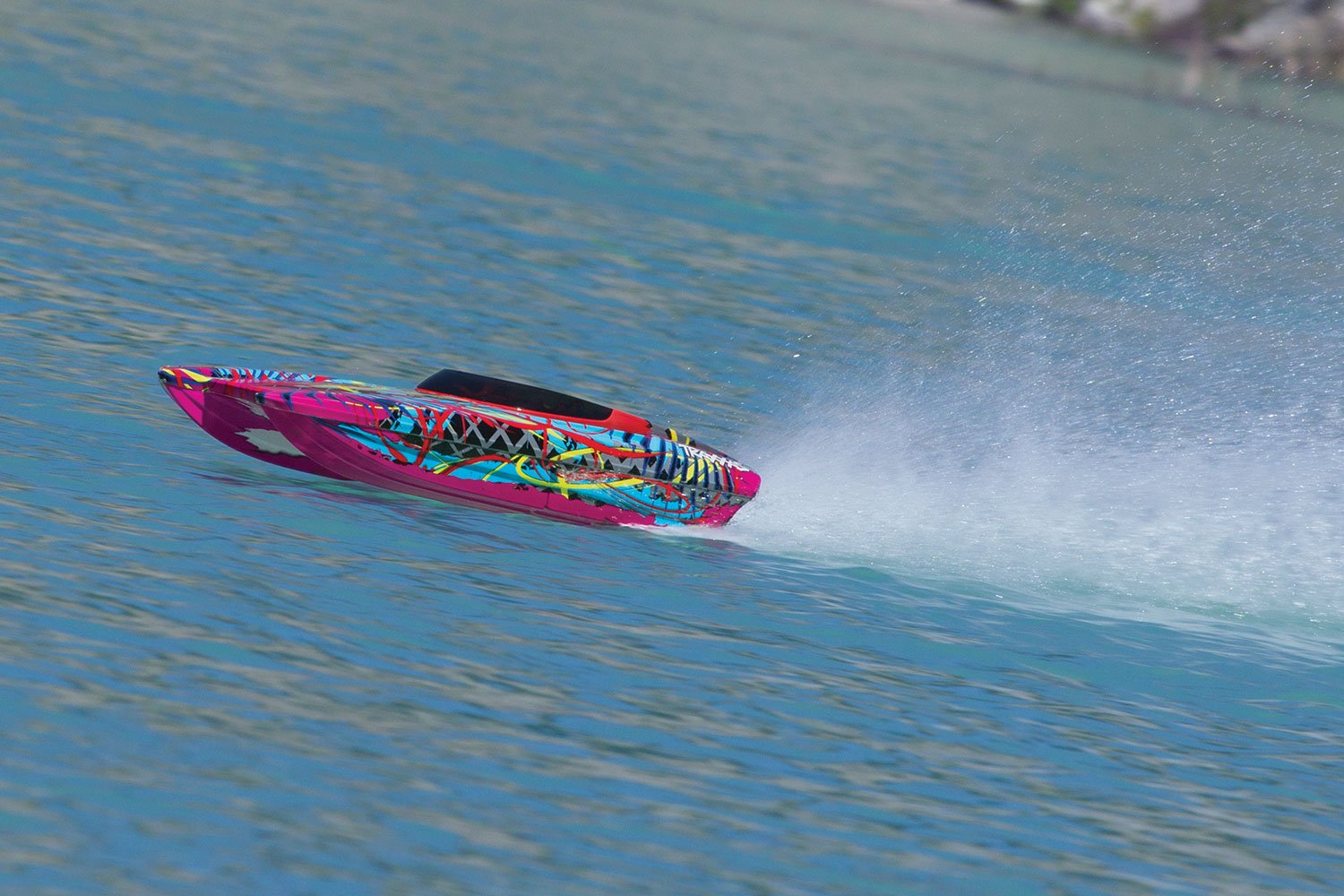 There are several distinct types of RC boat hull, each with their own advantages and drawbacks. Before you get into purchasing your own RC boat, you should understand which variants are fastest. We’ve covered the main types below.

Hydroplane RC boats come in two variations. Firstly, there’s the full-body hydroplanes that race suspended on a cushion of air that becomes packed beneath the boat by front-mounted sponsons. Though fast, these boats are susceptible to blowing over the faster they go. Still, they are a popular choice among modelers looking for a rapid racing boat.

Secondly, there are the outrigger hydroplanes. These boats have a wide gap between the side-mounted sponsons and the main hull of the boat. As a result, they’re much faster and can achieve speeds exceeding 100 mph, though they too are susceptible to blowing over at top speeds. Both types of hydroplane design suffer on choppier bodies of water.

Monoplanes are typically your runner-up design when it comes to speed. They’re not as fast as full-body or outrigger hydroplane RC boats, but what they lack in speed they make up for in versatility. These boats perform better on rough, choppy waters than the aforementioned type, making them ideal for modelers who race on a variety of bodies of water.

Catamarans are usually slower than hydroplanes or monoplanes, yet they’re still capable of achieving incredible speeds. As well as being realistic scale models of the real thing, they’re also one of the most responsive when it comes to performing tight turns during a race. If you need something that strikes a good balance between speed and maneuverability, then a catamaran is likely the best pick.

With an exterior-mounted motor acting as the propulsion system for most tunnel hull RC boats, you sacrifice some speed for extra control with one of these designs. They’re more adept and responsive at turning, but won’t normally beat a high-end hydroplane design in a straight sprint race. Of all the hull types, with equally-matched boat specifications, you’ll normally find that tunnel hulls are the slowest varieties of RC boat. People who choose tunnel hulls often do so for the majestic way that they appear to fly across the water, though they’re not always first choice for speed.

How Expensive are RC Boats?

This is a broad question that will again depend upon several factors. For example, you’ll be determining your ongoing maintenance costs right from the moment that you decide on what category of boat to buy. Remote control sailboats are one of the lowest maintenance models available, and often have no propulsion system other than the wind. This means that there are no ongoing engine maintenance costs and no costs associated with refueling.

Alternatively, you may opt for a racing RC boat, which is typically the most common vehicle in the RC world. Whether you choose an electric, nitro or petrol-powered engine, you’ll be paying to keep running. You may also run into engine problems that could cost you the occasional fee to repair. 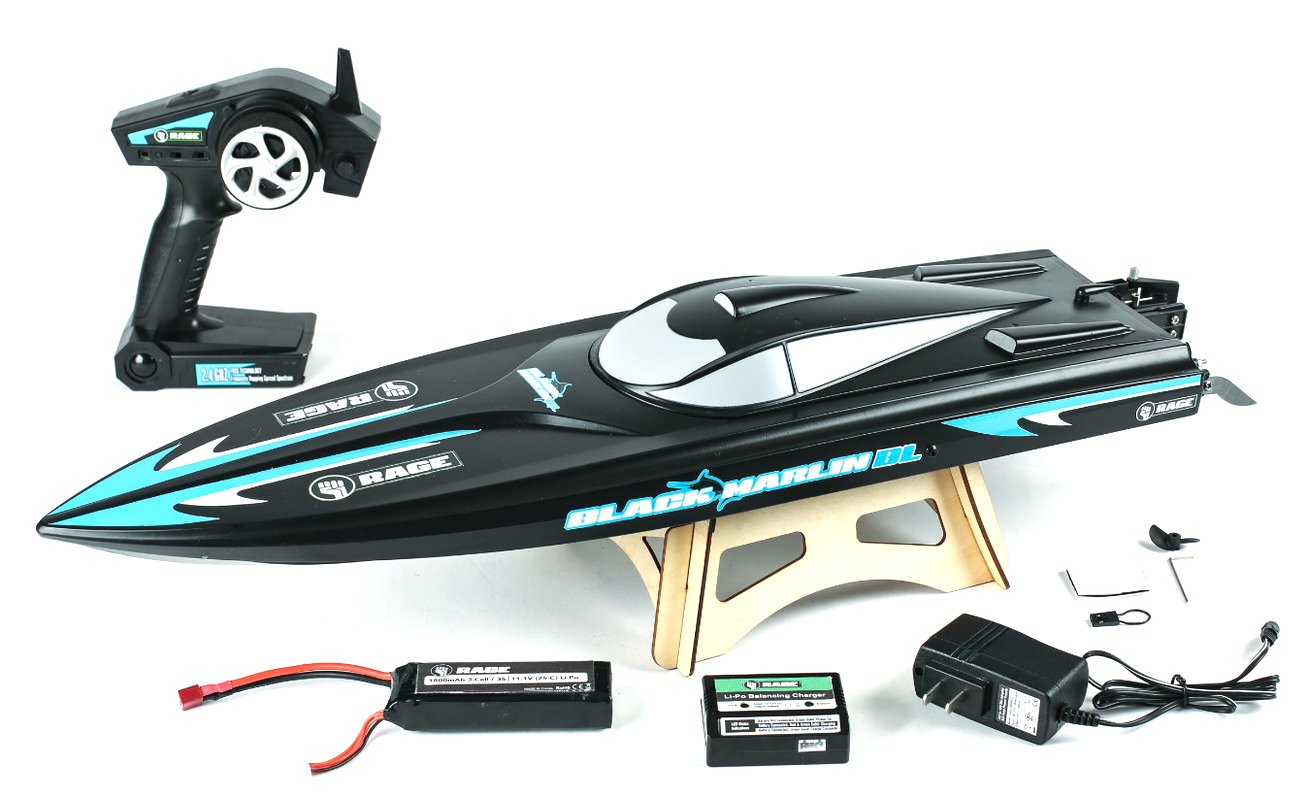 What is the Fastest RC Boat Ever Created?

With more advanced technologies and components constantly being made available to scale modelers, it’s difficult to say without any doubt which is the fastest in the world. For example, a modeler named Jörg Mrkwitschka set a new world record in September 2016 for his L8 Rigger, which hit nearly 180 mph. However, some vessels have since exceeded speeds of over 200 mph.

You’ll often find fast RC boats available have been fine-tuned, having many components chopped and changed for more powerful ones. Normally, you won’t break any world records simply by purchasing an out-of-the-box item. However, we’ve put together some examples of the fastest RC boats that you can buy premade.

Traxxas is known for producing fast RC boats available. The Rage RC Black Marlin Boat is a uni-body hull and can achieve speeds of between 30 and 50 mph, depending upon the power source used (NiMH or LiPo). Alternatively, the Traxxas DCB M41 uses a catamaran hull and can achieve over 50 mph top speeds. It isn’t cheap, but it’s clear the kind of expenses that you’d face if you were trying to build a watercraft that could beat the world speed record for a remote-control vehicle.

The fastest remote-control model vessels are not ones that you’d buy straight off the shelf. To achieve record-breaking speeds with an RC boat would require a great deal of fine-tuning, replacing default components with more expensive after-market replacements. Of course, this isn’t going to be what your average hobbyist does. In most cases, you’ll likely want to pick up a prebuilt model that’s good enough to race and that won’t break the bank.

If you’re looking for an off-the-shelf product but still want something that’s going to reach competitive top speeds, then you’ll need to know what you’re looking for. The fastest watercraft are full-body or outrigger hydroplanes, with monoplanes coming in a close second. Catamarans can also manage impressive speeds, whilst also having greater control when turning. For pure speed purposes, you’d be best avoiding tunnel hull boats, though some fine-tuned models have been known to hit competitive speeds.

Understanding RC Scale Sizes All You Need to Know