Remote control (RC) helicopters rely on something called channels, which are used for the transmitter to control distinct functions on the helicopter itself. The number of channels supported by a helicopter determines the number of functions that can be controlled. Cheaper models tend to have fewer channels, whereas more expensive models have additional functionality and thus require more channels to operate.

When getting started out in the hobby, many people may ask how many channels their RC helicopter should have. However, the simple answer is that it depends on the helicopter that you buy. When you purchase your first RC helicopter, you’ll need to choose one that has the number of channels that you desire. Each different channel is responsible for controlling a specific component, so the more complex the helicopter, the more channels it will have.

Having a model with fewer channels makes for easier flying for those starting out with the hobby. Helicopters which support more channels allow for a greater degree of maneuverability and control over the device, which might include the use of functions such as landing gear, lighting, and fine-tuned adjustment over elevation and directional control.

Before moving onto our list of the various helicopter channels available, we’re going to take a look at some of the important considerations to make before purchasing a new device, as well as other information about RC helicopters. A helicopter uses four main flight controls to adjust its movement during flight – the throttle, pitch, roll and yaw. Directional control is achieved through the elevator and aileron components, which are referred to as the cyclic control. Rudder control is achieved through a tail rotor using variable speed or pitch, controlled via the rudder stick. If you’re using a helicopter that has collective pitch control, controlled via its own channel, then this is typically mixed with the throttle control to ensure that a consistent head speed is maintained.

Whether you’re buying your first RC helicopter or picking up a new model to add to your collection, you’ll need to decide on what kind of power source you want to use: electric power or fuel. There’s no obvious choice in this category and each type of power source comes with pros and cons, as well as a need for specific equipment.

If you’re going with full power, then you’ll need a fuel pump and glow plugs, as well as a source of ignition. Of course, you’ll also need the fuel itself, too. This could be methanol, nitromethane or oil. What’s more, you will also need to learn how to operate, clean and maintain an internal combustion engine.

Alternatively, you could opt for electric power. Equipment needed to run an electric-powered RC helicopter would include motors, speed controllers, and of course, batteries. There is a vast array of considerations to make when choosing equipment and setup, so it deserves research.

If you’re concerned about pollution or noise, electric power might be the obvious choice. Electric motors have also come a long way since the older, weaker models were easily outperformed by gasoline engines. However, the downside to electric power is that you’ll routinely need to recharge your batteries and thus have more downtime between flights.

Below, we’ll explore the main differences between helicopters with varying numbers of channels, starting out with those that have 3 channels. We won’t look in-depth at helicopters with just 2 channels, as these are very basic models – the type that you’d find cheap in a toy store, designed to be flown with a very basic remote or smartphone over Bluetooth.

When you move beyond the very inexpensive toy model helicopters that flood stores in the lead up to the holidays, you’ll get helicopters with 3 channels that offer slightly more control over movement. The 3 channels are broken down as follows: 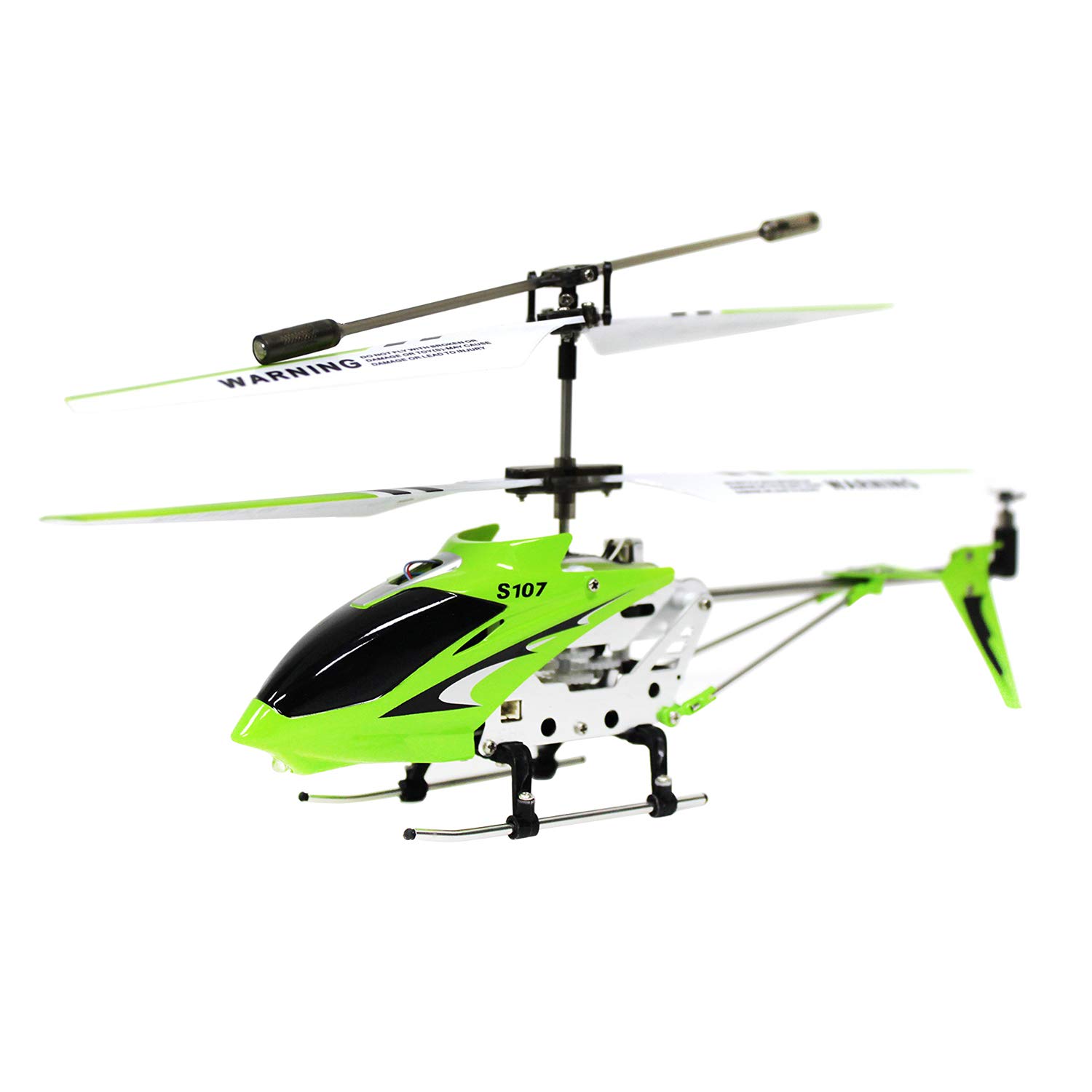 The Syma S107 is a good example of what a 3 channel RC helicopter looks like, with 2 main rotors serving the first and second channels, and a third, smaller rotor mounted on the tail boon, which controls the forward and backward pitch.

As a 3-channel RC helicopter, this model is extremely lightweight, as well as being compact. There are no overly complicated controls, making this model very easy to fly. What’s more, the lack of complex components means that it’s highly durable and easily able to survive multiple impacts. Even if the helicopter does suffer damage from a crash, these entry-level models normally come with replacement parts, and if not, components are reasonably inexpensive to replace.

When we move into the 4-channel category of RC helicopters, controls start to become more complicated. These types of helicopter are still seen in the toy category of helicopter, but are also the basis for some of the cheapest hobby-grade models available. These helicopters use cyclic control via a component called the swashplate. The means of control vary depending on whether you’re using a hobby-grade helicopter, or a single rotor fixed pitch model. 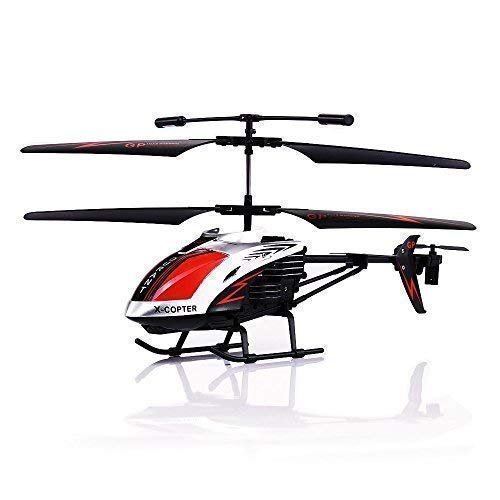 The GPTOYS RC helicopter is a good example of a 4-channel RC helicopter. As a model in the toy-grade range, it’s relatively inexpensive, but features 4 channels to help new hobbyists get used to the increased level of control offered by 4-channel models. Its built-in gyro provides greater stability and performance when hovering.

Electric powers the internal motors, and as a low-spec model, the battery life means that you can often get multiple flights out of a single charge. Like the 2-channel model mentioned above, this helicopter is built with a durable chassis that can withstand a crash.

Moving onto 5-channel helicopters, this is the absolute minimum spec needed to exercise control over a helicopter using something called collective pitch. Collective pitch is typically used on all larger helicopter models these days with rotors that have a diameter or around 2 feet or more.

With 5-channel RC helicopters, the first four channels have the same function as with any helicopter that has a lesser number of control channels. The additional, fifth channel is used for the collective pitch control of the main rotor blades.

Though 5 channels are the minimum for a helicopter using collective pitch control, it is still a very limited design given the introduction of other functions such as gyros.

RC helicopters with 6 channels can perform all the same actions above, but bring additional advantages such as the ability to control left and right movement of the tail boon, or pitch the helicopter up and down on a horizontal axis. Movements become more fluid and realistic, with far more precise control than can be achieved through a helicopter with fewer channels. 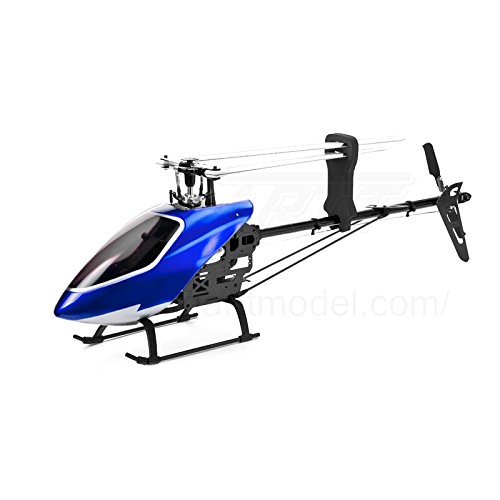 Although this additional level of control can be instrumental in escaping from a potential crash, helicopters with a greater number of channels can suffer from more complicated controls and more components to go wrong.

The GARRTT GT500 is one example of a 6-channel RC helicopter, which is a DIY kit that can be assembled from all the base components.

Beyond 6-channel RC helicopters, you can pick up models with 7, 8 or even 9 channels. At this point, you’re dealing with expert models that give access to a wide range of other realistic features, such as:

Now that you know what the differences are between helicopters with fewer or greater channels, we’ve put together a few pieces of advice to help get you going if you’re just starting out in the hobby.

Keep the tail facing you

When you’re first trying to get your helicopter off the ground, you should be sure to keep the model’s tail facing towards you. If you’re not yet overly familiar with your helicopter’s control scheme, then it can be all too easy to unintentionally fly the helicopter towards you and cause undue injury.

Training kits are available for RC helicopters, which consist of multiple mounted balls that fit to the underside of the device. These help to stabilize the helicopter and keep it facing upwards, rather than risking it flipping over. They can be useful for first-time flyers, until you become accustomed to the control layout.

The space in which you practice flying can be important. When you’re first learning how to get the helicopter off the ground, it can be useful to practice on wood or laminate flooring, as you can glide the device around the floor as you adjust to the directional control. You should also be sure to fly in an area with minimal obstacles so that there’s less chance of damage to the helicopter.

As we’ve alluded to above, before you start flying, you should try navigating the helicopter around on the floor. Start by practicing tail control, always keeping it pointing towards you. Once you can hold this position, raise the helicopter a short distance from the ground and try to keep the device in place. Once you’ve gained stability, you can start practicing directional control.

The number of channels supported by common RC helicopter models can range from 2 through to 9 and even higher; it’s possible that models with even more channels could be developed in future. If you’re just starting out in the hobby, then it would make sense to purchase a helicopter with fewer channels – around 2 or 3 – so that you can adjust to the control system, before introducing more features and thus complexity.

That said, although toy helicopter models can be reasonably inexpensive, their lack of collective pitch and more advanced controls can mean that they don’t prepare you for the difficulty that more advanced control schemes can have. As a result, if you’re serious about getting started in the hobby, then you might want to opt for a model that comes with 4 channels.